Benji is a cross bred Rex who hopped into committee member, Anne’s life one day as she had heard via a friend of a friend about this sweet little guy who was no longer wanted and in need of a good new home. 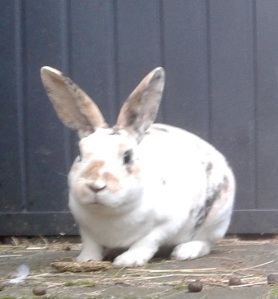 Anne has a particular soft spot for Rex’s and couldn’t resist opening up her home to this handsome young chap. Additionally, as is common with the Rex breed of Rabbits, they do tend to get issues with their hocks (hind feet/heels) due to the nature of their fine, soft fur which leaves them with less protection to their feet as their fur does not cushion them the same as other breeds.

Benji was only around 8 months old and very small for his age/breed. He was found to be quite underweight and has hind foot problems – sore hocks – due to his breed and his previous life confined to a small hutch. But thankfully he was found to have no other obvious health issues other than the usual minor dental spurring found in most rabbits who over fed on commercial foodstuffs and as such do not eat enough hay/grasses to help keep those naturally growing teeth worn down.

Benji settled down to life with Anne quickly and as luck would have it, found happiness with Anne’s other rescue/sanctuary Bun, Skye.