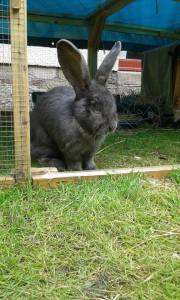 Blossom – a PAH bunny – was sold to a gentleman with obvious physical disabilities and the advice given on housing was to keep her in a puppy pen to allow for her large breed requirements. All relevant paperwork surrounding her sale has been retained to back up these claims.

So this was exactly how she was kept for the first two years of her life.

She spent all that time housed indoors by a heavy smoker, in a small puppy pen, fed a poor diet lacking in hay, whilst rarely given the opportunity to exercise, perform natural behaviours and as such, her owner seldom interacted with her.

She suffered from hind leg weakness which thankfully grew stronger once she was rescued from that situation and brought to live in a large, comfortable new home under the care of one of our members.

Blossom’s disability however, never held back; she would happily hop in her own clumsy way to explore her new found surroundings within a large spacious, enclosed garden (closely supervised of course) merrily outwitting her new carer and performing the odd ‘clumsy’ binky as she went.

When Blossom was rescued she was also found to be suffering from a heavy burden of mites which she underwent treatment for on several occasions, whilst her inner ears showed the scars of the constant irritation she endured.

Her incisors were also found to be deformed due to being fed a totally inadequate ‘commercial’ diet, which lacked access to hay. However, once in her new home, she managed to munch down everything she was offered. Thankfully her dental issues appeared to cause her little/no discomfort, therefore there was no urgency to correct her teeth; she was however, closely monitored by the Vets at the Royal (Dick) Veterinary School’s Rabbit Clinic.

After being with her new carer for just over a year, it was noted that her mobility was becoming more of a concern. It was found that she had an infected dew claw and as such she underwent an operation to remove the claw which had to be cut back right to the bone; it was hoped the fungal infection would no longer cause her any further issues by spreading to the leg bone.

Sadly, after all her new owner’s great care and efforts, the toll of her previous neglectful past, the muscle wastage and infections she suffered, finally took their toll on Blossom and we had to make the sad decision to PTS towards the end of 2015. 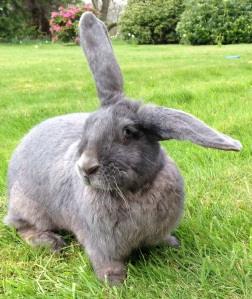 Blossom had the sweetest temperament ever! She simply adored attention and lapped up snuggles from her carer even after all she had been through.

She is greatly missed by all here at RRR, she was a beautiful big girl with a heart and character to match.