Flossy and Stan arrived with us at the beginning of Aug 2016 after being rescued from a hoarding situation which was slowly getting out of control. 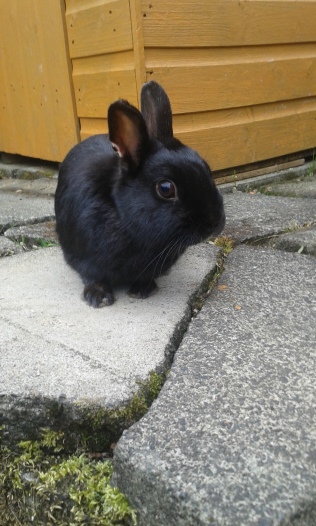 Whilst well intended, their former owner had learning difficulties and was slowly adding to a rather large collection of various animals, which included dogs, rabbits and other small furries. Whilst they were for the most part provided for well, their overall welfare was a concern as the individual animals were not getting the full attention they required.

One day her personal circumstances changed and with that she had to move into sheltered accommodation which did not allow pets; this prompted her carers to step into action enabling them to remove the animals temporarily whilst they sought out homes.

We were contacted in regards to the two remaining rabbits; the lady who fostered them began to realise just how much care and attention they needed and felt that with her work commitments and family life they needed more than she could realistically give.
We agreed to take the two Buns and offer them a home, initially planning to bond them individually with my own two single Buns, Barney and Ivy. However, it was quite clear when I went along to meet Flossy and Stan that, whilst they were not fully bonded at that time, there was a budding friendship in process so they would have to stay together.

Flossy at the time, was not neutered, but Stan was and since coming into my care, they were able to live together 24/7 with no real issues. Flossy is now neutered in addition to receiving her (and Stan of course) rVHD2 vaccines.

Sadly for Flossy, no sooner had they settled into their new home, she was diagnosed with a middle ear abscess; something I was initially concerned about as her mouth has a noticeable squint / raised upwards on her left. This is due, we suspect to muscle/nerve damage caused by the infection in her ear.

Whilst I did have my suspicions in the beginning, more so after the case of Toots, I could not feel a lump when I first went along to see Flossy and Stan prior to re-homing them, however, within a just a week or so of being in their new home, a small lump around the size of a pea did start to form in her left ear so it was off to the Vet to get it checked out.

Their foster carer had previously taken them to a nearby Vet as their claws were vastly overgrown and was told by the Vet that her facial disfigurement was most likely caused by her ‘chewing on the bars of her hutch’.

Her teeth are thankfully perfect so why this ‘diagnosis’ was made we will never know? Either the Vet did not carry out a full health check otherwise they would’ve seen her teeth were fine thus ruling out any dental concerns, nor did they find that her ears were full of wax (and should have cleaned and treated to prevent infection) or that they simply did not know what kind of issues to look out for in rabbits.

Sadly these cases are an all too common an occurrence in general veterinary practice and so many Vets either do not know how to carry out basic health checks nor know the warning signs to look for, or quite simply, do not carry them out for whatever reason. It is quite clear that there is a serious problem within Veterinary fields with numerous Vets simply not having gained enough experience or knowledge in the growing field of rabbit health, and the complexities nor treatments of.

Thanks to the bunderful team at The Royal Dick Vet, Flossy underwent a CT Scan to ascertain the extent of damage the ear abscess is causing which showed some minor issues with her nasal passage on the left, again not uncommon as the facial structure of Rabbits is very compact and an issue in one part of their skull can quickly affect the other.

She had a middle ear abscess which whilst quite small, it was still a serious concern and she immediately underwent treatments. She was given a course of  medications which helped lessen the impact, but during her next vet visit (Thursday, 15th Sept ’16) it was found that the lump (abscess) in her left ear was growing larger so she really needed her Op ASAP.

As we did not have the funds for this much needed procedure, we had to do some serious fundraising, quickly!

The 1st and recommended being an Operation to remove the abscess and surrounding infection.

2nd, continue on medications (pain relief, antibiotics etc.) which would not alleviate the condition in the long run and the risk was her condition would only get worse, thus causing her severe pain and discomfort whilst the infection spreads to other areas in her skull; ultimately spending the same, if not more money on a no win situation.

The 3rd, well, you can guess what that was, and for us, and indeed Flossy who is otherwise a bright, happy, cheeky and alert girl, it really was not an option! 😦

The operation to remove and treat the ear abscess cost somewhere in the region of  £1000 as it is quite a complex and delicate procedure, in addition to the time needed to recover whilst in hospital, not to mention Veterinary costs already accrued from her CT scan and ongoing medications, which we suspect will be around £400 to date.

So ideally we had to raise a rather large amount of approx £1400. We really did not want to take the 3rd option…

Given that we were nearing the half way mark on our fundraising total, Flossy underwent the procedure on Thurs 29th Sept, and was discharged home on Sat 1st Oct alongside more drugs than Boots the Chemist and quickly recovered from her ordeal.

The reason for going ahead prior to reaching our target is that we really did not want to delay this much needed procedure for any longer than necessary otherwise we risked the infection spreading and causing further damage to her ear and skull etc., as is always the case with rabbits, the quicker these issues are treated then the better the outcome.

Flossy is still doing great! Although it has to be said she has never been fond of ‘medication time’ but who can blame her!

Her post-Op treatments included both pain relief and – injectable – antibiotics, in addition to having to administer eye drops several times a day; as is the nature of such procedures on delicate areas, there was some level of nerve damage and as such she was unable to blink her left eye for a few days afterwards. This was to ensure her eye was adequately lubricated regularly throughout the day to prevent it drying out and ulcerating.

What we can say is however, her squint mouth had all but disappeared for a few days after the operation. A sure sign that the infection was indeed causing damage to the nerves even prior to the development of the abscess ‘lump’ in her left ear, thus leaving her with a facial disfigurement. It has now returned once the healing process got underway, but does not seem to cause her any undue discomfort or disability and she eats like a champ!

Thankfully Flossy is well on the road to a good recovery and the hope of a long happy life. But even to this day we’ve still a way to go before all her Veterinary costs are covered, please help is you can.

Our email for online donations is: paypal@rabbitsrequirerights.com or you can use the donate button on our sanctuary buns page.

Or perhaps do some fund-raising on our behalf, for example, a car boot sale? If you wish to support us in some way then please drop us a quick email to info@rabbitsrequirerights.com and let us know.

We are truly thankful for all your generous support and donations thus far!

We can thankfully say that Stan is in great health! He is a Netherland Dwarf and absolutely tiny, no bigger than a large Guinea Pig! He’s quite quiet and independent in himself but happy, alert and very active and really enjoys his food!

Both buns were insured with Petplan as soon as they arrived with us, but sadly given the seriousness of Flossy’s health we could not delay seeking out veterinary assistance for her and as such the policy was in its infancy (8 days) when she was diagnosed with an ear based abscess.  As suspected, even though we did submit a claim on her pet insurance policy, her condition nor treatments were not covered. This is standard when taking out a new policy, any health problem – outwith accidental injury – diagnosed with 14 days of activating Pet Insurance, will be classed as ‘pre-existing’ and as such will not be covered.

We will of course keep you all updated (see our Facebook page) on her progress. She is a very happy, bright and alert girl, bossy in herself and always causing some form of messy chaos, but she is also very sweet and loving; we are truly thankful that thanks to your continued support we have given her every chance of a long hoppy ever after life with her hus-bun Stan.